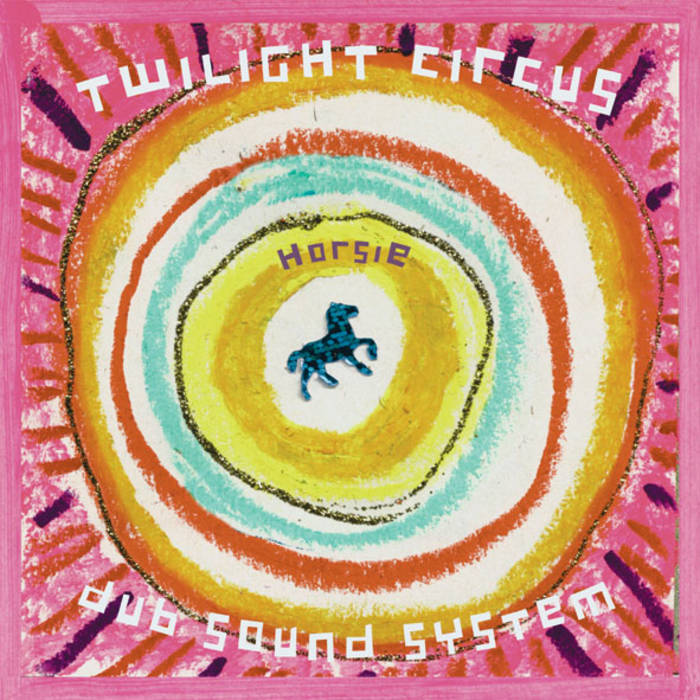 (P)Terry A very versatile and beautiful dub album. It has shades of space rock, electronica and post-rock textures. Imaginative and never boring. A good introduction to the work of Twilight Circus. Favorite track: Rock Salt.

"Dub revivalism at its most irie.
Perhaps the best of all the millennial dub reggae revivalists, Twilight Circus Dub Sound System is in fact a one-man show: Ryan Moore, a goth refugee (Skinny Puppy, Legendary Pink Dots). Maybe his background gives his dub the perfect balance of analog mixology and noir mood; certainly, unpredictability is his trademark. 1999's Horsie, Moore's sixth release, catches him searching for a way to wed his rock background with his reggae interests. "Oats," for instance, seems to find the midpoint between Krautrock and dub. On "Romy," he works with three completely different themes: a Scientist-like space station under attack by electro-termites, a drifting Duane Eddy-ish guitar line, and a monster nyabinghi-tinged undercurrent. "Dance" floats "Guess Who's Coming to Dinner" into a liquid techno-style groove. "KIK"'s drive recalls classic Revolutionaries at Channel One, but is suspended in an ambient chamber of glockenspiels. On Horsie, Moore pushes the element of surprise measure for measure so, unlike so many rote digi-dubbers, his thunderous riddims and subtly formed sounds disintegrate nostalgia into a landmark in post-modern dub". Jeff Chang - eMusic

Admittedly Ryan Moore is a nut. He'd have to be, considering the folks he's spent his years practicing his musical wares with...an impressive list of who's who in the Skinny Puppy and Legendary Pink Dots camps. Performing entirely on his own as the Twilight Circus, Moore's enthusiastic goofiness and truly uplifting nature lends greatly to the music, which is a hybrid of electronics, traditional dub, airy arrangements that allow for plenty of echo, and simply excellent sense of relaxation. If you are already familiar with his work in the Twilight Circus, Horsie contains nothing but a more expansive progression into his style. Very recommended and enjoyable. John Chedsey - SSMT


Multi-instrumentalist Ryan Moore returns with his sixth highly rinsed plate of dub grooves. With each release, this B.C. native/ Dutch resident has added a new twist to this instrumental form of Jamaican reggae, while retaining its trademarks: deep, stomach churning bass and cracking, syncopated drum beats. Whereas 1998's Dub Plate Selection was gigantic tower of sound, drenched in Middle Eastern melodies and with nods to electronica, with Horsie, Moore, whose main gig is as a member of the Legendary Pink Dots, has turned to the conventions of pop music. Guitars, which in the past were relegated to simply supplying some textural colour along with the keyboards, have been brought to the forefront with Moore drawing on the sad, melancholic figures of Durutti Column guitarist Vini Reilly for inspiration here. Moore has even straightened out the beats on a couple of tracks to make them more pop sounding. But these concessions shouldn't be a cause for worry. Moore hasn't abandoned the enveloping spaciness that has come to characterize TCDSS. Far from it. Horsie is still bathed in mountains of echo, reverb and delay that make your head swim. Once again, Moore has managed to equally confound and delight while at the same time broadening his vision of what dub should be. Richard Moule - ID Magazine, Canada